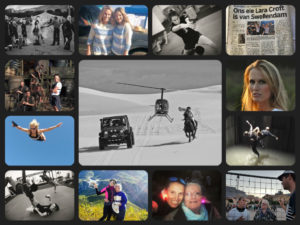 She grew up in Swellendam, 218-kilometers drive from Cape Town. From the age of two, Fleur was climbing trees, in her teens she took up white-water rafting, and horse riding and, as a young adult, she became a South African tug-of-war puller, representing South Africa at the tug-of-war world champs and received her South African colours.

Fleur’s favourite places are the highest peaks in the mountains, her best time spent is with her animals she loves so and her favourite thing to do is talking to kids and seeing the good, beauty and growth in other people. “When I walk out after talking to kids I hope to give them a better opportunity to succeed in life and through them become a better and stronger person myself.”

Fleur has worked as a stunt performer since 2004, being fearless doesn’t mean eliminating fear. Being fearless means knowing how to leverage fear. And to do that, you need to know a few things about what you are dealing with, fear pushes her to perform better.

“To be scared is always a good thing. You need that adrenalin before a stunt. But you can’t let fear overpower you. “The day when you don’t feel frightened anymore, it’s time to get out (of the stunt business).

Even her ninety nine year old grandmother approved of her career choice.

“She was my biggest fan, says Fleur, can you imagine me saying to me my granny ‘I’ve just lit myself on fire’ and her saying back ‘oh, my word, if I was younger I would have loved to have done that’.”

Fleur has done some amazing stunts throughout her stunt career. She has rubbed shoulders with some of the great’s, stunt doubling for Charlize Theron, Drew Barrymore and many more star studded cast on big Hollywood sets. She has worked on roughly forty movies in her career. Last year she also participated in the world record effort for most people performing simultaneous full body burns!

Fleur just started with at Petrichor Adventures here in Swellendam. In her words ….“Super, super excited about that as it means I will be where my heart wants to be, here in our town, Swellendam”

Here in Swellendam we all know Fleur, but what strikes me the most is that she, even with all the attention, success and celebrity, has stayed humble and kind, we wish her well in all her adventures and look forward to hearing stories about her for years to come!