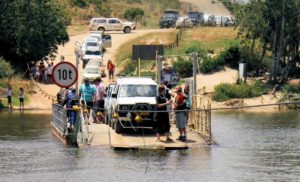 Dating back to 1914, the Malgas Pont is the oldest hand drawn pont and last of its kind in South Africa, offering a safe crossing for vehicles over the Breede River. Situated in Maglas (formerly Malagas) just forty five minutes’ drive from Swellendam in the Overberg, Western Cape.

The pontoon is a large floating barge operated by two men using harness and a pulley system to draw the barge across to the other side. If you ask nicely, you may even get to have a go yourself!

The pont can take a maximum of three cars or ten tons of cargo at a time and can be heaps of fun, the perfect photo opportunity for everyone.
The Malgas Pont ferries you to and from the little bankside village of Malgas, here, because it used to serve as a trading port.

You can navigate the Breede River some fifty km inland from its mouth, at Witsand and Infanta (on opposite sides of the mouth) to Malgas.
Back then, it was faster to send supplies from Cape Town by ship than ox wagon, which means the Breede River played a very important role in distributing goods to and from the farms and villages of the Overberg.

A steamer, called the Kadie, sailed from Cape Town right up the Breede River as far as Malgas, which acted as a port for the area.
The pontoon remains because once Malgas lost its importance as a port it was not deemed important enough to warrant the building of a bridge.
The pont is the only way across the Breede, by car, on the back roads between the N2 and Cape Infanta. To reach Malgas also sometimes referred to as Malgasy, take the turn-off from the N2 fifteen km outside Swellendam, towards George and then follow signposts.

This is something extremely special and a rare experience, we recommend you pop this on the top of your ‘bucketlist’ and do it soon as you can!